In colorectal surgery, a stoma is a small opening on the surface of the abdomen created to divert faeces to the outside of the body. A stoma appliance bag is then fitted to the stoma to collect the faeces. When the large bowel (colon) is brought to the outside, this is called a colostomy. If the small bowel (ileum) is brought out, the stoma is called an ileostomy. Most colostomies are formed on the left side of the lower abdomen and ileostomies are usually formed on the right side.

Often a stoma is created as part of other surgery to treat colorectal cancer, inflammatory bowel disease (ulcerative colitis or Crohn’s disease), or severe diverticular disease. A colostomy or ileostomy may also be created where faeces needs to be diverted in people with severe incontinence or constipation when other treatments have failed. Sometimes a stoma may be needed if a join (anastomosis) has been made in the bowel and needs to be observed to make sure it does not leak.

An ileostomy or colostomy can be created by bringing one end of the bowel to the outside and removing or sewing shut the remaining portion of bowel and leaving it inside the body. This is known as an end ileostomy or end colostomy (Hartmann's procedure). This is likely to be done if the procedure is intended to be permanent, such as when the anus or rectum has been removed. 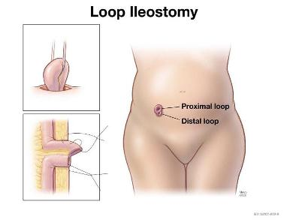 Alternatively, a loop of bowel can be brought to the outside through a larger stoma. The loop of bowel is then opened up and stitched to the skin to form a stoma. This type of stoma has two openings next to each other, and is called a loop colostomy if it involves the large bowel and a loop ileostomy if it involves the small bowel. A loop procedure is usually used when the colostomy or ileostomy is intended to be temporary.

For a loop colostomy, one opening is connected to the part of your bowel that actively digests food. This opening is where faeces will leave your body after the operation. The other opening is connected to the inactive part of your large bowel leading to your rectum. This opening only produces small amounts of mucus.A loop ileostomy is created in the same way, but involves diverting the small bowel instead, leaving the colon and rectum in place.

A stoma nurse will visit you before the operation to help you decide on the best place for the stoma and mark the spot chosen on your abdomen. If you are undergoing stoma surgery by itself and not as part of other surgery, it will almost certainly be planned as a laparoscopic procedure. This will be done under general anaesthesia, so you will be asleep and feel no pain. You will need to fast from midnight on the night before if your surgery is scheduled for the morning, or from 7 am if it is scheduled for the afternoon.

Full bowel preparation at home is needed before stoma surgery. This entails you taking a special laxative to clear your bowel completely on the day before your operation. The preparation may also include a low-fibre diet. The following website explains in detail what you can eat and drink on a low-fibre diet (www1.ghc.org/html/public/specialties/gastroenterology/colon-diet). You will be given detailed instructions on what you need to do and the medication needed in advance of your admission.

The operation is performed using instruments inserted through several small cuts on your lower abdomen.These cuts are about 1–1.5 cm long, but one cut is longer (3 cm) for creation of the stoma. A small video camera is passed through one of the cuts so that the inside of the abdomen can be seen on a TV monitor, and special surgical tools are passed through the other cuts to free the section of bowel to be removed from the surrounding tissue. Carbon dioxide gas is used to slowly inflate the abdomen and give a clearer view of the bowel. After the stoma has been created, the other wounds on the abdomen are closed with dissolvable stitches, followed by application of surgical glue that makes the wounds watertight.

You will be given a long-acting antibiotic in the anaesthetic room and an injection of local anaesthetic before you leave the operating theatre. The whole surgical procedure takes 30–60 minutes, depending on complexity and patient factors.

After your surgery, you will be taken to the recovery area and then to the ward. When you wake up, you will have several tubes attached to your body, including an intravenous infusion tube in your arm to give you fluids and any necessary drugs and a catheter in your bladder to drain urine. Most or all of these tubes are removed after 24 hours. Supplementary oxygen is given by nasal prongs. Antibiotics are not generally necessary after stoma surgery, but are given in some circumstances, particularly if the surgery has been performed as an emergency.

Some discomfort is to be expected after stoma surgery when your local anaesthetic wears off. The anaesthetist will decide on the method of postoperative pain relief that is best for you. Oral painkillers are all that is needed in most patients, but some require intravenous analgesia and a small number need an epidural. An epidural is often useful in emergency surgery where an open operation has been performed. It is rarely needed for laparoscopic or robotic surgery. Intravenous analgesia can be provided by a patient-controlled analgesia device, where a drip in your arm is connected to a syringe of pain-killing medication within a box. When the patient presses a button, a small dose of medication is pushed into the drip. There is a lockout that make it impossible to overdose. When you are discharged, you will be given pain medication to take home. It is best to keep taking this medication until the discomfort is manageable.

You can eat and drink as you wish after the operation, and if there is no problem with drinking, the drip providing fluid will be stopped. Some patients feel a little nauseous after eating and drinking soon after their surgery. In these patients, we wait a little longer before introducing food and fluid and keep the fluid drip going. You will be mobilised on the day following your surgery. The stay in hospital after stoma surgery is around 3–5 days, but sometimes patients need to stay longer. Essentially, patients are able to go home when they can manage the stoma without help.

The stoma will be red and seem rather large at first because of postoperative swelling, but usually settles down in the weeks following surgery, reaching its final size after about 2 months. The stoma may bleed easily, but this is normal and no cause for alarm. A stoma has no nerve supply, so is not painful to touch.

Many people find that their bowel function returns to normal about 3 days after surgery, and they can resume their normal diet at that time. Eating a balanced diet after your operation will aid your recovery. You may also be given medication to thicken or loosen your stools as needed. The stoma nurses will help you adjust your diet where necessary.

You will not be able to drive when you are discharged from hospital, so it is important to arrange a friend or relative to take you home. When patients can resume driving after this type of surgery is determined on a case-by-case basis. This is usually 2 weeks, but will be discussed with you after your surgery. Most people need longer before they can safely, forcefully, and quickly press the emergency footbrake to avoid a potential incident whilst driving. Please let your insurance company know when you have been given the all-clear to resume driving.

When you get home

Many people feel tired and weak after surgery of this type, and full recovery may take one month. When you get home, you will need someone to help with meals, housework, and shopping. For the first week or two you may tire easily, so try to alternate short periods of light activity and rest in bed, taking care not to spend too much time lying down because of the risk of developing a blood clot in your legs (deep venous thrombosis).

Do not lift anything heavy, such as children, groceries or washing, or do strenuous work like digging the garden or lawn mowing for the first 6 weeks. You may resume intercourse when you wish.

You may get some pain off and on around your wound for 4 weeks. This is to be expected. Taking a mild painkiller regularly will help with this. If the pain does not seem to improve or you are worried, contact your GP or our colorectal nurses.

How soon you can return to work following stoma surgery depends on what type of work you do, and this will be discussed with you after your operation.

A follow-up appointment in the clinic will be arranged for 1–2 weeks after your surgery to check your stoma and discuss further management if necessary.