Cancer of the large intestine is known as colon cancer, and cancer in the rectum (the final part of the large intestine) is called rectal cancer. Cancer of the colon or rectum (together often referred to as bowel or colorectal cancer) usually starts from a small benign (non-cancerous) growth called a polyp. The cells in this polyp may then undergo changes in their genetic make-up, resulting in uncontrolled growth and spread. At this point, the growth is called cancer. In some people, bowel cancer can develop spontaneously, with no background of polyps. 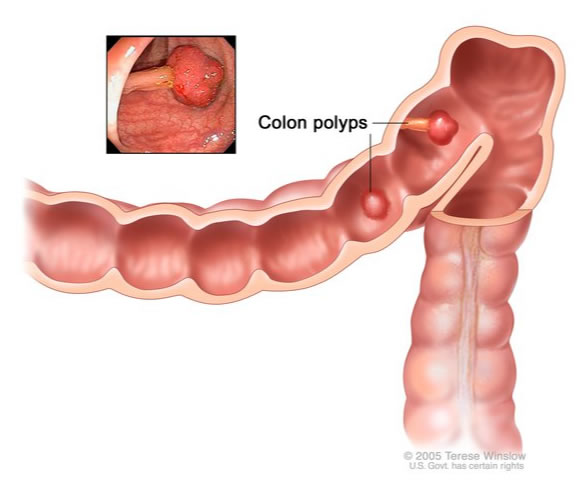 Bowel cancer is the third most common cancer in the UK, with around 41,000 people diagnosed with the disease each year. The lifetime risk of developing bowel cancer is presently 1 in 16; for men the risk is 1 in 14 and for women 1 in 19.

We still do not know what causes bowel cancer, but certain factors are thought to increase the risk of developing the disease. These include alcohol, smoking, being overweight, high saturated fat intake, a history of colon cancer in close relatives, inflammatory bowel disease, presence of polyps, and age older than 60 years.

The bowel screening programme started here in 2006 and now covers the whole of mainland UK. Its purpose is to detect polyps and other changes in the colon and rectum that might develop into cancer in the future. This means that bowel cancers can be detected early on before people have any obvious symptoms. Colorectal cancer is usually very slow growing, and can be cured by surgery if detected before it has started to spread. Benign polyps can also be removed, which decreases the risk of developing bowel cancer later on.

In the early stages, people with bowel cancer may have no symptoms. However, the following may indicate colon cancer:

These symptoms can also occur with a number of benign conditions as well, but it is always important to exclude bowel cancer as a cause. Anyone experiencing one or more of the above symptoms for more than three weeks should see their GP as soon as possible. The good news is that more than 90% of bowel cancers can now be treated successfully if diagnosed early.

Bowel cancer is diagnosed by symptoms, medical history, and certain diagnostic procedures, including colonoscopy or CT colonography. When the results of your tests are available, your diagnosis and treatment options will be explained to you. Usually it is a colorectal surgeon who makes the diagnosis, but if it is made by someone else, they will refer you to a colorectal surgeon immediately.

All patients with a diagnosis of colorectal cancer are discussed at a large multidisciplinary hospital team meeting. It may well be that the best initial treatment would be chemotherapy or radiotherapy to shrink the size of your growth before any potentially curative surgery. If this is the case, you may be referred to a medical oncologist. The type of surgery that is best for you will depend on the exact location of the cancer, its size and type, and whether it has spread. This will all be explained to you by a colorectal surgeon.

Luckily, we do not need to remove the whole large bowel if a cancer is found within it. The specific segment affected, including its blood supply, will need to be removed whether it is on the left or right side of the large bowel or in the middle (transverse colon). This procedure is known as a colectomy.

Roughly half of all patients with a diagnosis of colon cancer can be cured by surgery alone and will never need to see an oncologist. However, if it is felt that you would benefit from a course of chemotherapy after your surgery to reduce the risk of the cancer returning, the colorectal surgeon will refer you to a medical oncologist. The networks and pathways for the treatment of all types of cancer are well developed in the UK, including in Essex, so you can be sure that you will be streamlined into the right pathway.