Diverticular disease (also known as diverticulosis) is a condition in which small outpouchings (diverticula) develop in parts of the bowel wall. The normal colon is a smooth hollow tube, with a wall made up of three separate layers. However, there can be local areas of weakness in the bowel wall, and in some people the inner bowel lining protrudes through these weak areas, causing diverticular disease.

Diverticula can occur throughout the gastrointestinal tract, which extends from the mouth to the anus. They can occur anywhere in the large bowel, but the most common place they are found is in the left part of the colon known as the sigmoid colon.

Diverticular disease is very common and occurs increasingly with age. It is believed to be present in half of people in their fifties and in three quarters of those in their late seventies. It is also common in people who are prone to constipation. It is thought to be becoming more common in people with a low-fibre diet, especially if diverticular disease is present in other family members. People with connective tissue disorders (causing increased stretchiness of the soft tissues) are also at increased risk of developing diverticula. 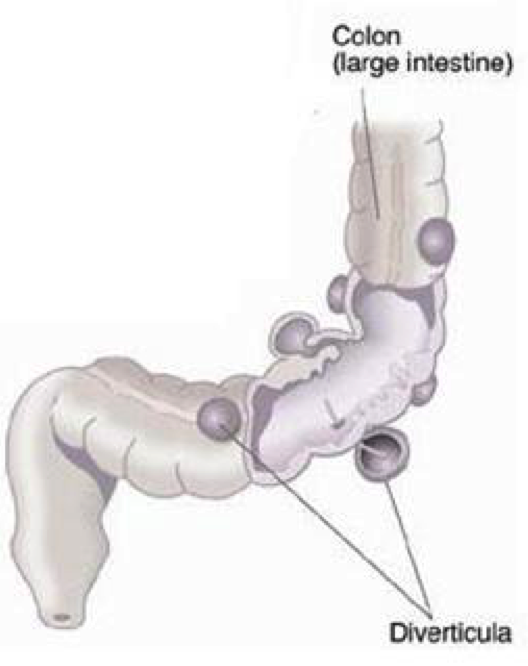 Diverticular disease can be found by chance in people with no symptoms whatsoever during any type of large bowel investigation. Most commonly, these investigations will be colonoscopy or CT colonography. Without these tests, the diagnosis cannot be confirmed. Likewise with diverticulitis, a CT scan is needed to make the diagnosis.

The symptoms of diverticular disease and those of bowel cancer can be very similar and sometimes colonoscopy or CT colonography cannot look at the affected area accurately because of the large number of diverticula present. Therefore, surgery is sometimes recommended to make sure a bowel cancer is not missed.

Unfortunately, once diverticula have formed they will never go away, although we may slow their progression by improving the amount of fibre and fluid in the diet if this has been poor in the past.

Sometimes people with diverticular disease need to be admitted to hospital as an emergency, usually because they have developed diverticulitis and an abscess next to the bowel. This may need to be drained by X-ray techniques and treated with antibiotics. Occasionally the bowel wall can become perforated at the site of an inflamed diverticulum, and this also requires emergency surgery (usually in the form of a partial colectomy).

Some patients develop abnormal connections between their diverticula and the bladder (a colovesical fistula) or the vagina (a colovaginal fistula), allowing the bowel contents to spill into these organs. These patients need a surgical repair on a planned (elective) basis. Elective surgery is also needed for diverticular disease if there is a narrowing (stricture) in the bowel.